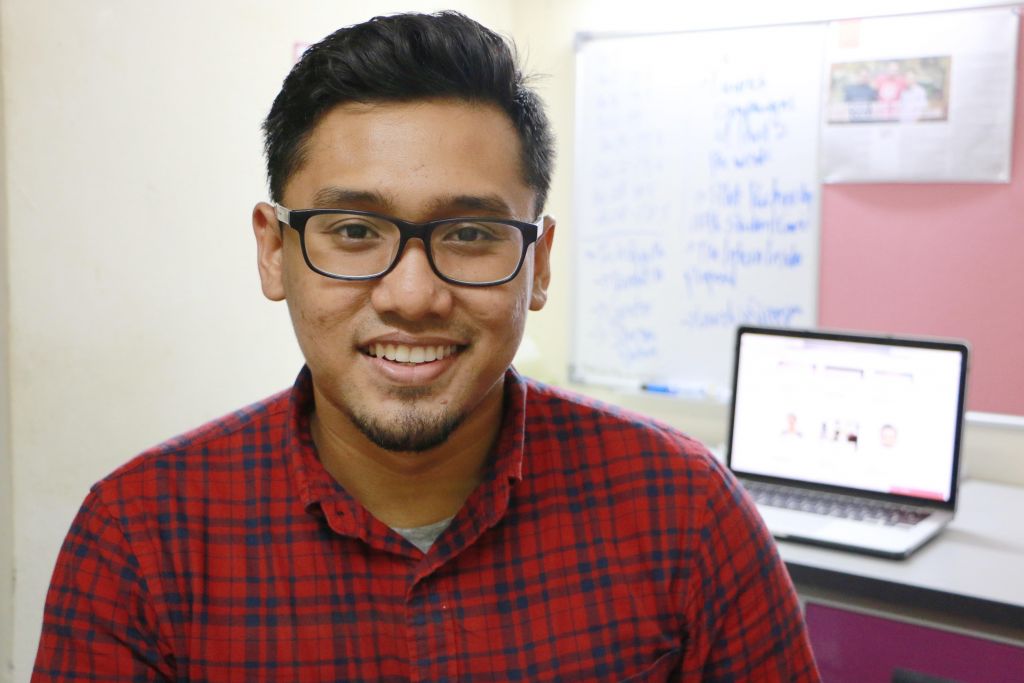 Tengku Syamil is the co-founder of SkolaFund – the crowdfunding platform which aims to make university education more affordable for students across Asia.

What inspired SkolaFund and how did it all start?

Syamil: During my first year in IIUM (International Islamic University Malaysia), I came across a post in an unofficial university Facebook group called IIUM online, by a student who expressed that he has tried all he could to get financial support but sadly to no avail. He mentioned that both his parents are sick and he works part-time to support his family. However, it is still insufficient for him to pay for his tuition fees and other liabilities that he is shouldering. After sharing his plight, he asked if people knew of organisations that he could approach to get some aid for his case.

To my surprise, aside for the few which commented with suggestions, hundreds commented requesting for his bank account saying that they wanted to help out with whatever small amount that they can. It was really inspiring. This was not an isolated case, it was just the first one that I saw. There were a few more similar posts that I saw receiving similar support.

Each time there is a delay in  PTPTN (National Higher Education Fund Corporation abbreviated to PTPTN in Malay) disbursement, I will be reminded of this group of students who are surviving on a bare minimum. There will be news of students who can’t even afford basic meals and there will be ground-up student-led initiatives to help them out. A heart-warming scene in my university.

What if I could come up with a platform to give these students a voice so that they could reach out to supportive people? A platform that can allow community to come together and crowdfund scholarships and award it to deserving students. With a crowdfunded scholarship, it would reduce the financial burden off the student allowing them to channel their energy more to studying and learning. At least, they could have a more fair chance to compete for their grades, get better CGPA (Malaysian Grading System) and in the longer run increase their chance to secure a better-paying career which will pull their family out of the poverty cycle.

Tell us more about how SkolaFund works.

Syamil: Skolafund.com is a platform for higher education students and researchers to raise funds for study expenses that covers fees and allowances for students in need, and projects such as student society, research, and final year projects. This is how it works in general:

1. Submit Application to Start Campaign. To start a crowdfunding campaign, students and researchers will need to submit an application on Skolafund.com. Applicants will need to submit documents to prove higher education enrollment like an official letter of admission and matriculation card, household income slips if the student is raising funds for fees and allowance and other campaign-related document.

2. Skolafund Verifies. Our team will verify each application to the best of our abilities to prevent scam and fraud campaigns. We will get the applicants to be as transparent as possible so that our community sponsors can make an informed decision when funding a campaign.

3. Campaign Page Goes Live. Once we have verified an application, we will launch the crowdfunding campaign page. The campaign will be live for 30 days.

4. Garner Support & Raise Funds. In the 30 days, campaigners and Skolafund.com will be working together to promote the campaign and raise funds. It has been proven that the probability of success of a campaign increases with more promotions and awareness.

6. Obtaining Fund Raised. Funds raised for the purpose of paying tuition fees will be transferred directly to the respective institution for fee payment. Only funds raised for stipends will be channeled to the student directly. For projects, fund payouts will be made in tiers according to pre-agreed milestones. These are steps in place to protect the interest of sponsors and to prevent fund abuse.

There must be a lot of students interested in “try their luck” with SkolaFund. Are there specific criteria or requirements to filter out eligible students?

Syamil: That was what we realised early on when we launched Skolafund.com. We had hundreds of application from students that were not serious about their campaign.

To minimize this kind of application as much as possible, we have introduced an All-or-Nothing Policy. Only campaigns that raise 100% of their target will be deemed successful. Campaigns that do not hit 100% will be considered unsuccessful and funds will be refunded to sponsors and sponsors may choose to fund a different campaign if they wish to.

With this policy, students will need to prepare their campaign page as well as possible and work towards promoting it to raise the full amount. This requires substantial effort and filters out non-serious students.

The criteria that we set are:

What happens after the funding target is reached? To what extent is SkolaFund involved?

Syamil: If fund raised is meant for fees, Skolafund will transfer it directly to the university to avoid abuse. If it is meant for stipends, it will be transferred to the student. Skolafund encourages students to update their sponsors at least once every six months via email.

What has been the toughest challenge you have faced while building this business?

Syamil: The biggest challenge is to educate the students and community about crowdfunding. When we started in 2015, crowdfunding is a foreign concept to many.

Many student that came to Skolafund.com thought that we were a platform that gave out scholarship. They thought creating a campaign will automatically win them money.

So we had to do a lot of education to make them aware of the concept and how they can utilise the platform for their own causes.

We are in a better position now with more and more students becoming aware of crowdfunding and Skolafund. However, in the bigger scheme of things, there are still a lot of education to be done because there are still many students running fundraising campaigns manually using donation boxes and bank account transfers when they could make the whole process more efficient and transparent by doing it on a crowdfunding platform.

We are on a mission to make Skolafund.com the go-to platform for all types of fundraisers in the higher education industry.

Does this apply only to Malaysian and Singaporean students? How about students from other Asian countries?

Syamil: Students of any nationality studying in Malaysia and Singapore are welcome to start a campaign on Skolafund.com, too!

We are not able to host campaigns started by foreign (non-Malaysia & non Singapore) students studying in other countries at the moment though, because we do not have the proper verification system for that yet and we do not want to risk hosting fraudulent campaigns.

Syamil, please tell us a little about yourself – your family, your childhood, and your education.

Syamil: I am the eldest son with three younger siblings. I was born and raised in Singapore. I had my primary and secondary school education at Madrasah Al-Irsyad (Singapore) and I did my A levels at Tampines Junior College (Singapore). I did my national service for two years, after A levels at SIngapore Civil Defence Force as an administrative clerk. I was offered to study business at Nanyang Business School at NTU but decided to head to Malaysia instead after my National Service. I enrolled myself to the only university I knew of at the time which was the International Islamic University Malaysia, so that I can be in Malaysia and learn from their new and growing startup ecosystem led by Malaysian Global Innovation and Creativity Center. An unconventional  move that got me a lot of weird look.

If you had not become an entrepreneur, what would you be doing now?

Syamil: Before I got into entrepreneurship, I wanted to be a teacher – inspired by the many great teachers I had during my schooling days – or a social worker – to help solve social issues. I like to run volunteer projects back in the days, but I realized that my efforts could not self-sustain. I thought if I could have a revenue model for the effort, maybe my projects can be alive for a longer period. That was when I discovered social entrepreneurship and eventually met people who were solving various problems by marrying tech and entrepreneurship.

You were once listed as Forbes 30-under-30 Social Entrepreneurs in Asia. How did this effect your outlook?

Syamil: I felt grateful for the recognition and it was refreshing. I have never seen  it as a personal recognition, but I was only receiving it on behalf of the Skolafund team. Being a young team, there are lots of ups and downs and uncertainties. Being recognized by Forbes boosted our team’s morale. It signaled that we must be doing something right and motivated us to keep on moving forward. Being listed by Forbes has given a more positive brand image for Skolafund and I think it has indirectly boosted our credibility as a platform.

How did you meet your co-founders and what are their roles at SkolaFund?

Syamil: Syakir Hashim was the first to join me when Skolafund was just an idea. Syakir was my classmate back in junior college, and he was also my business partner for my first business. He was in charge of operations, business development and administration. Syakir has recently left the executive team to secure a great opportunity with a New York based startup.

Faruq Rasid and Wildan Zulfikar are Skolafund tech co-founders. I got to know Faruq by chance through a friend before I started Skolafund. I sent him a text early 2015 to ask if he would be interested to help me out with Skolafund.com when it was just starting out. He replied positively, fortunately. Faruq is our product head. He is  in charge of planning and developing features that make Skolafund a more effective platform.

Wildan was introduced to me by one of my contacts. He was a university mate, but was studying at a different faculty. I contacted him and proposed that he join our team when we were selected for Startup Bootcamp Fintech Accelerator 2015 in Singapore. He feels for the problem that we are trying to solve. A semester before I contacted him, he had to take one semester study leave because of financial constraints. He agreed to join us because of that. Wildan works closely with Faruq to code and program features for our website. He also looks after our web security.

Any message or advice to inspire other young entrepreneurs?

Syamil: When you are young and lack experience, people may doubt you, your ideas and your capabilities. That is just natural. The onus is on us to prove ourselves. If you really believe in yourself and your ideas, put in the work. Results speak louder than words. There are also many seniors that are willing to help out. Don’t be afraid to ask for help when needed.