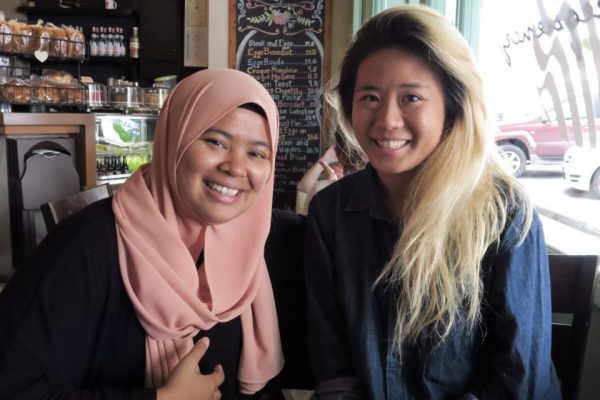 Huwaida Ishaaq and Jia Ying Chia is the co-founder duo of Heartwrite Co. – an independent publishing and communications company in Brunei.

Tell us more about Heartwrite and how did you come up with the idea?

H & Y: We’ve worked together on writing assignments before. We appreciated each other’s talent and having the same attitude towards environment sustainability and working with art, we came up with Heartwrite. The idea is to assist people who want and are doing good in connecting with their communities so they can realise that vision together hence the decision to build an independent communications and publishing business – essentially writers for hire. We were both at a point I think where we wanted to pursue writing about the things we were passionate about, and to delve into publishing which is something we both were interested in. So literally over a meeting and a few too many coffees we drafted the basic framework for the business.

What is distinctive about Heartwrite, and how is it working out so far?

H & Y: For us, Heartwrite stands out with it’s approach to the traditional publishing and communications businesses and also being one of the few if not only publishers focusing on the creative side of things in Brunei. It’s going well although writers and the publishing industry are still in their fledgling state right now. There is a lot to work to be done with growing the creative industry here before we have any real traction but I believe it’s going to get there!

One area of your business is publishing. How does traditional publishing work compared to self-publishing?

H & Y: We operate in between self and traditional publishing with how we do things. The key for traditional I would say is that there are a lot of things that would typically be taken care of for you like marketing, promotions, and those contractual elements which in most cases mean you are ‘hired’ or work for someone. Self -publishing is pretty much the same thing except you bear all the cost and but also get to keep all the profit from book sales. There are pros and cons to both and it is really up to the writer on what they want out of publishing their work.

What has surprised you in the journey?

Ying: I think we definitely foresaw how difficult it would be to move books in Brunei, and also the cost of producing publications, the things we would be able to write about. Censorship does make it difficult if a writer wants to pursue certain areas that don’t coincide with the Melayu Islam Beraja rule of governance. But it still leaves a wide range of topics available so it isn’t too difficult of a challenge.

Writers are always welcome to discuss publishing outside of the country if that is the case. I think the idea of running a ‘writerly’ business was also something we might have underestimated; as writers and as people, we have our own preferences and those can be causes for discussion.

When we started doing the Writer’s Jams, the amount of people who showed up was surprising! A room full of writers, willing to share their work seemed unheard of before that. Personally, I’m surprised by the amount of people who are interested in writing, or learning how to write. It’s a form of communication we use every single day but so many people don’t feel confident in expressing themselves authentically through words.

How do you see reading and writing interest in Brunei society today and how can it affect your business continuity?

Ying: It’s an interesting time for writers in Brunei. It feels like the creative arts scene has really blossomed in the last couple of years, and for writers it’s a really exciting time as it’s becoming more recognized as a skill and an art in Brunei. Creative or copywriting still has a way to go. People still aren’t willing to value writing as a legitimate profession, yet. Key word at the end there!

The culture of reading has always been around but it was always regarded as a ‘nerdy’ thing to do or something to pass the time. I feel like readers are a little more invested now though in owning their passion for books – we have all kinds of book clubs, independent sellers curating great collections, and discussion groups dedicated to readers and writers, like a feminist book club and regular events organised by B:read which is a local organisation focused on improving the reading culture in Brunei.

We do monthly Writer’s Jams where anyone can come and learn about new genres of writing, or just get feedback on their work. There’s also Spoken Word which we ​were running with a comedy group Bruhaha​, which we intend to revive this year. As long as the industry keep growing and we find the market mass we need to sustain the business I think things will be relatively stable!

Huwaida: Lots of writers are writing in secret and sporadically. We’ve met a few good ones through the jams and people who just get in touch with us. It’s a time of change, for sure. Writing can be a courageous act, and we’ve been seeing more people stepping up. It’s gorgeous.

Please tell us something about you and what each of you is working on at Heartwrite.

Huwaida: We both write for clients, and when running projects we both split tasks and have our own roles depending on the projects. For admin and management of the business, it’s mostly me, though I’m trying to have that shared more equally as well.

Ying: When we started we were both working on writing for clients and on the publishing side of the business but decided try a system of focusing our energy into specific areas each year. So essentially we each take on managing and running the different parts of the business and are able to gain a fuller level of understanding for both the communications and publishing industries.

We help each other as much as we can and need to, especially when it gets hectic. Currently I’m finding that working in publishing is something I really enjoy despite the current difficulties in the global industry.

Have you always been interested in writing? Or was it something you fell into after trying a few different things?

Huwaida: Always!  However, before starting Heartwrite Co., it wasn’t something that I actively pursued. My friends have always known that I write and they would often ask me to help with some communications they need to prepare. I had been running a project management office service when I finally decided to focus on writing for other people full time​.

​Ying: Definitely. I was writing stories as a kid and dreaming about becoming published. I’ve been writing in some way or another for work either in marketing or for publications. I was a business journalist prior to starting Heartwrite so there was a bit of an adjustment to make in terms of writing style but it was a fun challenge.

Which role does writing play in your life?

Huwaida: Ironically, I used to write a lot more before Heartwrite. I used to journal when I first wake up, perhaps three times during the day, and once more before bed. Journaling was a way to record life, to practice honesty. I journal a lot less, and some days I don’t journal at all. It can take a few days to get back to rhythm.

Ying: I think the ironic thing about being a writer for work now, specifically in communications, is that like Huwaida there is a lot less creative writing going on in my life! It’s a form of expression for me and a creative outlet so making the effort to sit down and write is really important. Even if it only happens once a month!

Which other tools and productivity apps are you using, and how do they help you?

Huwaida: I try not to depend on the phone and apps, but I do frequently use basics like alarm and calendar, especially as I run other community projects as well. It’s mostly for scheduling and time management.

Ying: I use my phone a lot to manage things like appointments or deadlines, and rely on the free apps provided by Google like Gdrive to keep our work and accounts in one place. It makes life a lot easier!

How often do you and your partners fight when there is a difference in opinion? And what keeps you together there after?

Huwaida: We recognise the difference we have as a strength, though it takes a lot of conscious management. I’m more action and results oriented, so I like being able to see what needs to be done and work on them according to the agreed vision and schedule. I also have a strong sense of fairness, so I like to be able to share work.

Since I often like to raise the bar even on my own standards, I often feel that I have to hold back and let go of what I feel is necessary. In the first two years it was hard to vocalize this but it’s become easier to express how I feel about the work, business and partnership.

To maintain the sense of fairness, I channel my energy elsewhere. It doesn’t mean that we don’t clash anymore, but I’m less frustrated and we’re friends.

Ying: We definitely are two strong willed women with different personalities but I think that having respect for each other’s strengths and weaknesses is what keeps us going. We push each other to be better and at the end of the day it is a lot self reflection and open, honest conversation that helps the partnership along. Teamwork makes the dream work!

Do you have any tips to share with young aspiring entrepreneurs out there who love to write?

Huwaida: As a writer, I feel it’s a duty to preserve the world as it happens. Words change worlds. Recorded history offers lessons. As an entrepreneur, our top priority is to create value. There is a lot of synergy between writing, which is a form of communication, and entrepreneurship. They are different facets of the same thing and this becomes clearer the more you understand your purpose as a person and what it is you intend to create in the world.

Ying: It is a tough industry right now to be in but don’t give up! Writing as a career means you get to do two things: create and share. Finding ways to share your authenticity as a writer/entrepreneur means you’re constantly having to challenge yourself to remain disciplined and creative.

Jonathon Tse -Shaking Up the Textbook Market in Singapore