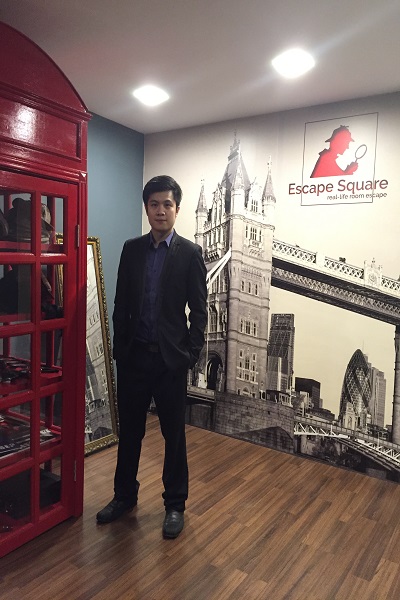 Hiro Tien is an example of how a humble beginning should not stop anybody from pursuing their entrepreneurial dreams. He is the founder of Social Deal  – the premier group buying deals in Brunei, and Escape Square – the themed escape game that is highly featured on Trip Advisor.

Tell us why and how Social Deal started

During my first year at University of Brunei Darussalam, I co-founded an online blog shop with my classmates and ran the company for 18 months. We were doing pretty well until Facebook came about and our competitors flocked to Facebook’s ‘Pages’ to sell. We refused to convert and closed down when we lost the market.

I was on the semester break in my third year when I realized the need to help my country diversify away from the oil and gas industry. I couldn’t wait for another year or two to graduate, get a job and start making an impact so I decided to defer my studies and start a company immediately. I also wanted to get back up where I fell and so I started paying attention to what was trending on Facebook.

Groupon caught my attention and there were no daily deal sites in Brunei so I thought why not build one for Brunei. At that time, we had 60-70% Facebook penetration and 80% internet penetration but there was literally no active e-commerce sites operating. I saw the opportunity to bridge the gap between local businesses and the affluent online audience in Brunei, riding on the growth of Facebook during that time.

How do you differentiate yourself from Groupon and how do you add local flavor to your site?

SocialDeal is a daily deal website pretty similar to Groupon, except we kept the ‘guarantee of bulk buyers’ concept. I am not sure how much Groupon’s model have changed over the past few years but at SocialDeal, we offer money-back guarantees to both buyers and sellers. We ensure 100% refund upon deals not tipping, and merchants do not have to pay anything if we don’t hit the target. We are also heavily marketed in local colors, taking into account various cultural and religious practice, an example would be deals on food to break fast during the month of Ramadan.

How many merchants do you current work with, and how many deals do you have at a time?

We work with some 450 local merchants on an ad-hoc basis. At any one time, there is probably 50-100 deals available on the site, including product deals. Because of the population size here, we try to focus on quality over quantity in terms of deals. Rather than having a thousand different deals at the same time, we focus on curating the best 50-100 deals at any time for our members.

You mentioned that Brunei is a relatively small market. Is it possible to scale up this business?

We had our fair share of trouble scaling it up in a market where population is 400,000. As the sole-player in the country, we do believe we have more upside potential. We are currently at roughly 20,000 members and we’re eyeing to double or triple that in the next 2 years. There might not be opportunity for millions of users within the country, but opportunity for diversification is there. For example, we have opened up new revenue channels via advertising packages on SocialDeal.com.bn, and we are definitely open for collaborations to set up in other countries, especially in other ASEAN countries where group buying doesn’t exist or has not taken off.

For would-be entrepreneurs, could you tell us the difficulties you faced when starting this business?

I started SocialDeal Brunei when I was 21. Being a young entrepreneur has its pros and cons. On one hand, I was able to make use of resources such as the university’s networks and mingle with the local media using the

university brand. Successful local entrepreneurs were also very willing to impart knowledge to me as a student.

The challenge came when I was out pitching SocialDeal to the earliest merchants, where I had to get them to slash prices by 50% and above. What they saw was a young chap who had no idea what he was thinking. Things only got easier when we got our first 10 merchants or so and got the ball rolling.

Although it is relatively easier for us to close a deal with new merchants nowadays, some challenges still remains. For example, Although some merchants remain loyal, not every merchant would like a repeat deal after their first deal, prompting us to continuously seek out newly established businesses too.

Where do you see Social Deal in the years ahead? Tell us more about your plans.

We are focusing on building out SocialDeal.com.bn to its maximum scale nationally. We believe it has the potential to capture as much as 30-40% of Brunei’s population as customers. Although not actively pursing foreign markets, we’re keeping an eye on potential expansion to ASEAN region should such opportunity arises.

Hiro, tell us more about yourself

I had fun growing up as the kid who works every holiday. I got to play many roles which I believe contributed to shaping me as an entrepreneur today. I was once a supermarket attendant, a cinema usher, a milkshake maker, a junior auditor, an office clerk, a tuition teacher, a book writer, and a fishmonger.

That was before I got into university. I did not grow up in a well off family and as such I developed trading skills when I was a kid at school. I would trade rare magazines, marble balls and Pokemon cards with my schoolmates and resell them to make a profit. In secondary school, I learned the art of modifying controlled cars and made some pocket money while finishing ‘O’ Levels. And then there were the two web companies i founded at university. I eventually returned to continue my studies at University of Brunei Darussalam and graduated with a B.A. Accounting & Finance in 2014.

Did you always know you were going to be an entrepreneur?

For as long as I can remember, I wanted to be a lawyer. I was admitted to the University of Manchester in U.K. and could literally have packed up and moved there for 3 years. But I was unable to finance the high cost of tuition and so decided to enroll at our national university back at home.

And then I thought I was going to be an accountant or a banker when I was going through university. Some things happen for a reason I suppose, I would probably not be an entrepreneur had I gone for the law degree. I caught the entrepreneurial bug when I started a blog shop business with my university mates during my first year at university. I realized I had what it takes to wear many hats and most importantly, I thoroughly enjoyed the experience.

What lessons have you learned starting this business, and what would you have done differently?

I learnt that a strong team is vital for any successful business. I started the business alone and had to do most of the work myself in the earliest days. As I started recruiting new members, it was apparent that I could have done a lot more with the time I spent if I had focused on building a strong team instead of going at it alone. Entrepreneurship is very stressful, so get a co-founder at least!

You also started a business called Escape Square. Tell us more about that.

Escape Square is my latest venture. It is a detective themed escape game company aiming to go global via franchising. In short, Escape Room is a real-life game where a group of 2-8 players are trapped in a room and has to solve puzzles in order to escape.

We are currently the most followed and reviewed Escape Room company in Brunei with over 500+ real customer reviews and average rating of 4.8 out of 5.0 on Facebook ‘Escape Square Brunei’. We are also No.1 on TripAdvisor for Fun & Games in Brunei.

Participants play the role of famous London detectives in the 1900s solving mystery crimes. They will be assigned a 100% dedicated bilingual game master throughout their experience at Escape Square, sticking through from pre-game briefing to game session monitoring and from post-game briefing to photoshoot session at our lounge.

All our games are not gory, not dark and not scary but highly intellectual and challenging. Imagine being a real detective investigating a crime, making deductions and testing hypothesis at the crime scene. Players will use elements and clues found in the room to solve the crimes within an hour. We currently have 6 games and can accommodate up to 50 people in the same hour in-store.

In addition to in-store offerings, we also offer private and customized mystery crime games at outdoor venues. Recently, we organised a large scale event with Jerudong Park Country Club, our national theme park, and hosted over 700 participants, utilizing 20 role-players and game-masters to create the crime scene.

We are actively seeking to grow Escape Square abroad, especially in ASEAN, via a franchising model.

As an entrepreneur, what do you think is the most important value or character to have?

Be extremely curious and relentlessly resourceful.

Don’t be afraid to ask questions! You miss all the shots you don’t take. If you have a dream, just do it!

Social Deal can be found at http://socialdeal.com.bn/

Escape Square can be found at http://www.escapesquare.com/

Mary Northmore – Giving the Gift of a Smile

Ang Kok Seong – Help is a text away in Malaysia